Big money is at it again.

After learning about the dangers of fracking the measure G folks simply wanted to protect San Luis Obispo County from this dangerous practic. Realizing that fracking was on the rise, seeing the evidence of what was happening in areas that fracking was taking place people began denouncing the practice. protesting  and that it’s time to reduce drilling for oil citizens of SLO joined together to put a stop to it before it was too late.

Chevron Corporation, Aera Energy, a subsidiary of Exxon Mobil, California Resources Corporation and Sentinel Peak Resources, the Arroyo Grande oil field operator, have contributed $5.4 million to oppose measure G. In addition to an over abundance of TV and radio commercials, and print ads, NO on G yard signs have been randomly plastered throughout San Luis Obispo without permission of property owners. 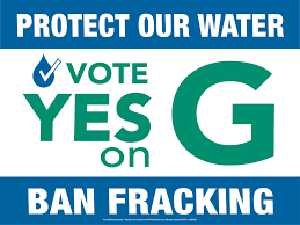 Fact: Measure G allows existing oil operations to continue.
“Petroleum extraction land uses lawfully existing on the Effective Date may continue as nonconforming uses to the extent allowed under State and local law. Such uses shall not be enlarged, increased, extended, or otherwise expanded or intensified.” (Sec. 2.B.8.a)

Big Oil lies are intended to deceive you…

The TRUTH:
Yes on Measure G allows existing oil operations to continue for as long as the operators want.

YES on Measure G allows all routine well maintenance as defined by State rules and regulations, including use of acids for maintenance only.

YES on Measure G takes a huge step toward protecting our groundwater resources.

BIG OIL plans to expand  by adding 481 new oil and waste injection wells in SLO County. Oil operations remove 500,000,000 gallons of water from SLO County aquifers every year – do we want that to grow?

120,000 gallons of toxic waste-water is injected into our drinking water aquifers every day in SLO County – do we want that to grow?

YES on Measure G will help reduce a planned increase in greenhouse gas emissions associated with expanded oil drilling. SLO County oil fields extracts one of the most carbon intensive oils on Earth. Every year 100,000 metric tons of CO2 is generated by Big Oil extraction in SLO County – do we want that to grow?

TAURUS April 20- May 20 "I MAINTAIN" A fixed … END_OF_DOCUMENT_TOKEN_TO_BE_REPLACED

ARIES March 21-April 19 “I AM” A cardinal fire … END_OF_DOCUMENT_TOKEN_TO_BE_REPLACED

December 22 - January 20 “I ACCOMPLISH” A … END_OF_DOCUMENT_TOKEN_TO_BE_REPLACED