Join the San Luis Obispo Blues Society for its annual Holiday Dance Show with Earl Thomas on Saturday, December 1, at 7:30 pm at the SLO Vets Hall (801 Grand Avenue). The show will open with Burning James & the Funky Flames. Because it’s the holiday season semi-formal dress attire is optional. If you want to dress up and dance to some great rhythm and blues, go for it. Admission is $20 for Blues Society members and $25 for the general public. Tickets are sold at the door. Advanced purchases may be made at Boo Boo Records and Cheap Thrills in San Luis Obispo, at Paradise Records and Trading Post in Santa Maria, or online at My805tix.  Doors open at 7:00 pm; 21 and over please.

The Blues Society relies on volunteers to produce and staff each concert. Tasks include set up, admission and drink sales, or clean up after the show. In exchange for their time each volunteer receives free admission and two drink tickets. To volunteer call the volunteer line (805) 541-7930 and we will contact you.

Singer and songwriter Earl Thomas has a rich and varied performance history. Originally from Tennessee, Thomas started his musical career playing with a jump blues band called the Rhumboogies in the late 80s and was a four-time San Diego Music Award winner with this band. He launched his recording career in 1991 with the release of Blue….Not Blues. Earl made his European debut at the Montreaux International Jazz Festival in 1992 and has spent the last 25 years touring Europe with B.B. King, Buddy Guy, Elvis Costello, Ike Turner, and his own San Francisco band the Blues Ambassadors. His high-energy stage shows elicit comparisons to Sam Cooke, Otis Redding, and Al Green.

Thomas has recorded more than a dozen albums, with a stylistic range that includes blues, soul, funk, rock and gospel. His recent albums include Introducing The Blues Ambassadors (Earl Thomas Music, 2011) and Crow (Earl Thomas Music, 2016). Earl is also a songwriter, with songs covered by artists including Tom Jones, Etta James, Solomon Burke, and Screaming Jay Hawkins. His “I Sing the Blues” became a hit for Etta James. He has twice been nominated for a Grammy Award for his music.

Although Earl lives in California, he spends nine months of the year touring in Europe. “When I was starting with all this, I had a goal and it was this: I wanted to sing my own songs and have friends all over the world,” he says. “I definitely, 100 percent, do that. There are at least 25 cities in this whole world where, if I were to get put in jail, somebody would come and bail me out. I did all right.” According to Biscuit & Blues, Earl “has become legendary for shows that hiss with powerful energetic performances.”  This band delivers a powerhouse performance that will keep you dancing. 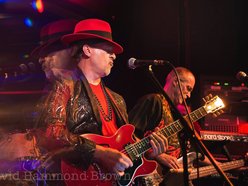 Burning James and the Funky Flames are a premier funky dance party band! In the six years they have been together, they have played hundreds of shows to swaying, pumped up, sweating crowds. This six-piece band features a live horn section, a dynamite rhythm section and an exciting frontman performer. With an extensive playlist of old school funk, soul and blues as well as great original tunes, the Funky Flames really get a dance floor jumping. The members of the Funky Flames are all accomplished musicians, veterans of many bands and musical styles. They have to be, to pull off one of the most interesting and unique playlists to be found anywhere. The diverse backgrounds of the Funky Flames season their funky musical gumbo with jazz, blues and rock influences, but deep down they all just love James Brown! The band includes “Burning” James Scoolis (guitars, vocals, and soul), Ken “Hammond” Burton (organ, piano, synthesizer, and vocals), Rick Pittman (drums and vocals), Billy Baxmeyer (bass and vocals), Bob Bennett (trumpet) and Brad Hackleman (saxophone and vocals

Group Tickets. The Blues Society offers a $5 discount on group tickets. Tickets must be purchased in advance. The minimum group size is 6 people and everyone must be 21 or over. For more information, contact Dan at 805/541-1837.

TAURUS April 20- May 20 "I MAINTAIN" A fixed … END_OF_DOCUMENT_TOKEN_TO_BE_REPLACED

ARIES March 21-April 19 “I AM” A cardinal fire … END_OF_DOCUMENT_TOKEN_TO_BE_REPLACED

December 22 - January 20 “I ACCOMPLISH” A … END_OF_DOCUMENT_TOKEN_TO_BE_REPLACED