Doors open at 7:00pm, the show starts at 7:30pm. Tickets are $20 for Blues Society members and $25 for the general public. Purchase tickets at the door or in advance at Boo Boo Records and Cheap Thrills in San Luis Obispo; Paradise Records and Trading Post in Santa Maria. 21 and over please.

The Blues Society runs on volunteers to produce and staff our concerts. In exchange for helping with set up, selling tickets, serving drinks, or cleaning up after the show, volunteers get free admission to the show and two drink tickets. If you have extra time and energy to contribute, please call our volunteer line (805) 541-7930 and we will contact you. 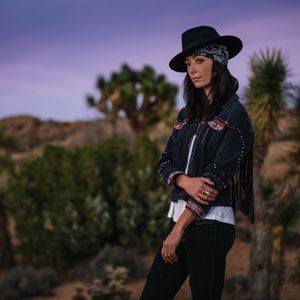 Kara Grainger travels the world inspiring audiences with her fresh interpretation of rhythm & blues – combining strong vocals, fiery slide guitar, and a heartfelt style of song writing. Her music career began in a small shipping town in Australia (Balmain) that was renowned for its artistic Bohemian community, rich nightlife and live music scene. At the age of 16 Kara joined with her brother Mitch to form the band “Papa Lips”, which made two albums and toured all over Australia in the late 90’s.

In 2007 Kara signed with Australian label Craving Records to record her debut solo album Grand and Green River, which received critical acclaim on Americana charts. Since moving to Los Angeles, Kara has produced three CDs:LA Blues (2011) is a homage to some of Kara’s biggest inspirations; Shiver and Sigh (Eclecto Groove, 2013) includes some of LA’s finest blues musicians; and her recent release Living with your Ghosts (June, 2018, Station House Records) is #3 on the Billboard Blues album charts.

Kara is truly an international performer. Not only has she and her band played the European festival circuit, they have performed for the Himalayan BluesFoundation in northern India and the Jakarta International Blues Festival. In the states, she has played at the Portland Waterfront Blues Festival and opened for Buddy Guy, Tal Mahal, and Jonny Lang. With a rhythm session comparable to the sounds of Booker T and the MG’s combined with Kara’s incendiary guitar and stunning vocals, this truly is a show not to be missed.

High-energy stage performance. Sizzling hot guitar solos. Smooth and soulful vocals. Backed by a rhythm section that is second to none, this is the Dennis Jones Band. Dennis’s feet are firmly rooted in the past, yet his heart and soul are connected to the present. He writes songs that seamlessly blend the best of both worlds, presenting a unique and contemporary style of American rock and blues.

Dennis was born and grew up in rural Baltimore County, Maryland. He started playing guitar at 13, citing as his influences Albert King, B. B. King, Guitar Shorty, Jimi Hendrix, and Jimmy Page. In 1997, in his late teens, he moved to Europe and spent years developing his skills. On his return to the United States in 2004, he gigged with the Zac Harmon Band when they won the International Blues Competition (IBC) in Memphis. Since then, he has participated at the IBC as performer, presenter, producer, and judge at various times.

Based now in Los Angeles, he has performed in many California and national venues, toured extensively in Europe, and performed on at least five Legendary Rhythm and Blues Cruises. He is a featured performer in or has written songs for several movies, including “Sea of Fear” (2006), “Babe and Ricky’s Inn” (2013), and “How We Got Away With It” (2013). In 2012, he produced Four Shades of Blue at the New Daisy Theater on Beale St., Memphis, featuring the Dennis Jones Band, Zac Harmon, Eddie Turner, and Lazy Lester.

Dennis writes most of the songs he performs, saying “Blues music is my therapy. Writing songs has been a way of helping me understand and deal with life, love, and loss.”  He has released six well-regarded CDs, including Both Sides of the Track (2016), which was ranked the #1 blues-rock album on Roots Music Report, and WE3 LIVE (August, 2018). His band mates are Sam Correa on bass and backing vocals and Raymond Johnson on drums.

“It’s risky to make predictions, but if anyone has a legitimate shot at filling the blues guitar hero void it is Dennis Jones. He has the head, heart and hands to do it.” – Dave Rubin, “Keeping the Blues Alive”

TAURUS April 20- May 20 "I MAINTAIN" A fixed … END_OF_DOCUMENT_TOKEN_TO_BE_REPLACED

ARIES March 21-April 19 “I AM” A cardinal fire … END_OF_DOCUMENT_TOKEN_TO_BE_REPLACED

December 22 - January 20 “I ACCOMPLISH” A … END_OF_DOCUMENT_TOKEN_TO_BE_REPLACED