SLO Blues Society ’s will feature Tommy Castro & The Painkillers in their first show of the new year, on January 26. at the SLO Veterans Hall, Grand Avenue. The show will open at 8pm with Back Bay Betty. Tickets are $20 for Blues Society members; $25 for the general public. Tickets are sold at the door; in advance purchase at Boo Boo Records and Cheap Thrills in San Luis Obispo. Doors open at 7:30pm — 21 and over please. 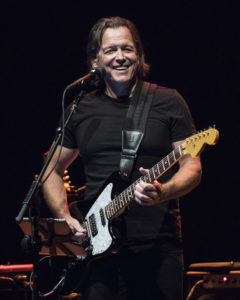 Castro’s musical roots run deep. His high-energy music enjoyed by fans all over the world, is inspired by the sounds he absorbed while coming of age on the rough and tumble side of San Jose, California. During the late 1960s and early 1970s, this was Castro’s home turf—his stomping ground. It was a place where the street-tough Mexican Americans and the counter-culture hippies came together to drink, smoke, laugh, party and listen to tunes—the hippies with their blues and rock, the Mexicans with their soul music. Mixing the blues-rock he loved and the soul music he heard blasting out from the lowriders cruising the streets, along with the socially conscious message songs of the day, Tommy’s own sound was born. He honed his guitar playing to a razor’s edge on the city’s competitive bar scene, where he learned how to capture an audience with his intensely passionate vocals, stellar musicianship and dynamic performances. Almost every major rock and soul act, from Ike & Tina Turner to Janis Joplin to Elvin Bishop to Taj Mahal, toured through the area, and Castro was at almost every show. He saw John Lee Hooker, Albert King and Buddy Guy & Junior Wells at the same local blues bar, JJ’s, where he often jammed, dreaming of one day busting out.

Over the course of his career, Tommy Castro’s San Jose DNA has always inspired his music, whether he’s squeezing out the deepest blues or the funkiest soul grooves. He and The Painkillers—bassist Randy McDonald, keyboardist Michael Emerson and drummer Bowen Brown—have played hundreds of shows to thousands of music lovers, always leaving his audiences screaming for more. All of his albums are filled with original blues, soul and West Coast rock, each song showing a slightly different side of Castro’s multifaceted musical personality. Billboard says the band plays “irresistible contemporary blues-rock” with “street-level grit and soul.”

You won’t want to miss Tommy Castro & The Painkillers firing on all cylinders behind him. 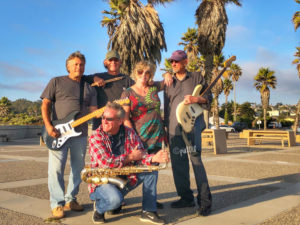 Back Bay Betty,  a local favorite five-piece dance band from Los Osos. is known for creative original music and covers by classic and contemporary rock, blues, soul and jazz artists. Come out for an hour of blues by Linda Martin on keyboard with her bold, soulful voice, singer-songwriter Ron Pagan on guitar, keys and vocals with Eric Stever on saxophone and vocals. Rounding out the rhythm section are Phil Youngman on bass guitar and vocals and Don Utterback on drums and vocals. Back Bay Betty performs at music venues throughout the county.

TAURUS April 20- May 20 "I MAINTAIN" A fixed … END_OF_DOCUMENT_TOKEN_TO_BE_REPLACED

ARIES March 21-April 19 “I AM” A cardinal fire … END_OF_DOCUMENT_TOKEN_TO_BE_REPLACED

December 22 - January 20 “I ACCOMPLISH” A … END_OF_DOCUMENT_TOKEN_TO_BE_REPLACED