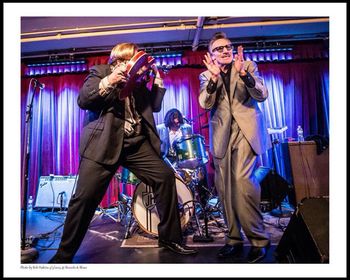 The Rick Estrin & the Nightcats sound is an eminently dance-able high powered celebration. The band performs Rick’s well-known, well-loved songs “My Next Ex-Wife” and “If You Dig It, Don’t Do It,” as well as crowd thrilling material from the whole Nightcats crew.

Bandleader and singer Rick Estrin ranks among the best blues harp players and is in the tradition of masters Sonny Boy Williamson II and Little Walter Jacobs. He was nominated for the 2019 Contemporary Male Artist of the Year. Says Downbeat: “Rick Estrin sings and writes songs like the brightest wiseguy in all of bluesland and blows harmonica as if he learned at the knee of Little Walter.”

Ticket are: $20 for members/$25 general admission. Advance Tickets for this must-see show may be purchased in SLO at Boo Boo Records and Cheap Thrills, in Santa Maria at Paradise Records, or online at My805tix. Day-Of Tickets will be available at the door.

TAURUS April 20- May 20 "I MAINTAIN" A fixed … END_OF_DOCUMENT_TOKEN_TO_BE_REPLACED

ARIES March 21-April 19 “I AM” A cardinal fire … END_OF_DOCUMENT_TOKEN_TO_BE_REPLACED

December 22 - January 20 “I ACCOMPLISH” A … END_OF_DOCUMENT_TOKEN_TO_BE_REPLACED